Currently, there is a statewide push to emphasize performing and creating in the arts. The statewide Arts & Humanities assessment (which consisted of 13 multiple-choice questions and 1 open response question) was eliminated a few years ago. It has been replaced by the Arts & Humanities Program Review which is a way for each school to assess their arts programs throughout the enitre year. We are encouraged to collect evidence of student learning throughout the year through pictures and video. Although there are still many kinks to work out with this process, I am a big fan of the switch to the Program Reviews. It is much more improtant for a student to be engaged in making music instead of reciting textbook definitions of music vocabulary words. (Most of you are probably not music teachers in Kentucky, but if you are interested in our new Program Reviews, you may visit the Kentucky Departement of Education website.)

With the new emphasis on the artistic process, we now have to adjust our outlook on other things as well, such as posting student work.  Since we are encouraged to document evidence for the new Program Reviews, I found myself taking more pictures in the classroom. A fellow teacher started posting pictures in the hallway to show what the students were DOING in the music classroom. During a visit to her school last spring, I saw her pictures and thought is was a fabulous idea!

At the end of August, I posted several pictures in the hallway highlighting a variety of activities and grade levels. (You can see on the right that I also saved some hallway space for the traditional paper exit slip.) 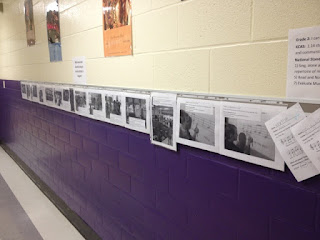 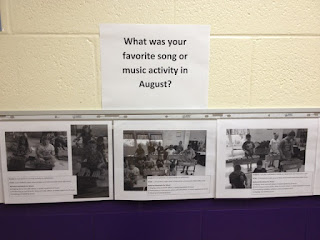 I wish I had money to afford printing the pictures in color, but they still look good in black and white.  (I posted the pictures in color on my classroom webpage.) I printed the pictures on regular copy paper and placed each picture in a plastic page protector before hanging them in the hallway. I plan on replacing the pictures with new ones at the end of each month.
According to district policy, all student work posted in the hallway must be accompanied by core content numbers. I have included both the state and national standards as well as the learning target of the lesson. Below you can see a few of the pictures. I have blurred the student faces to protect their privacy. 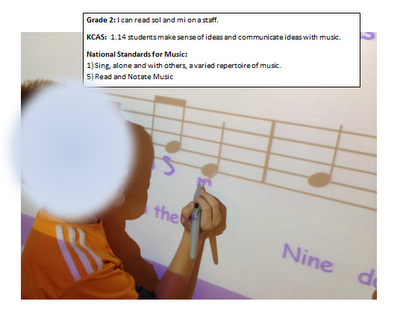 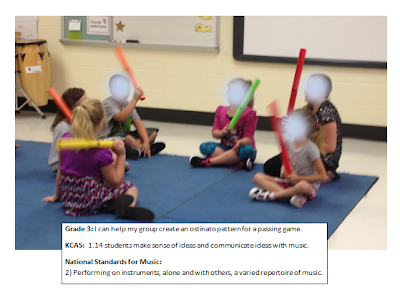 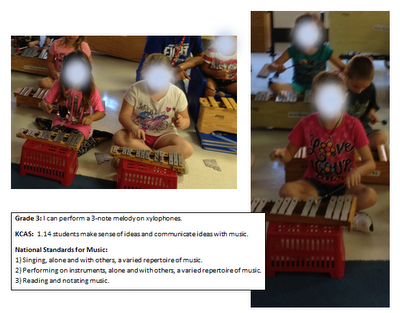 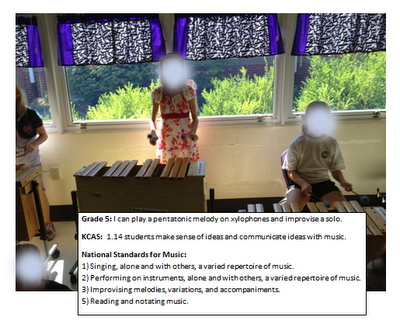 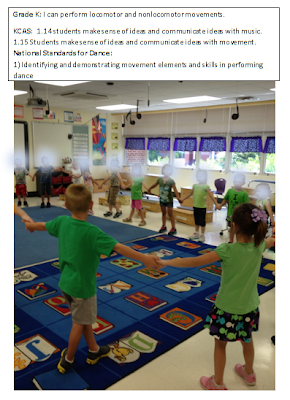 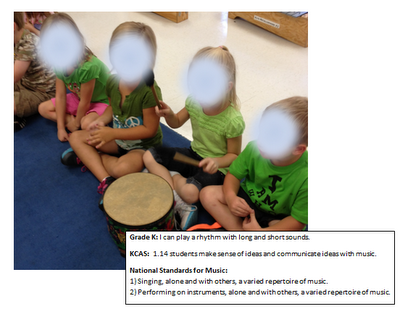 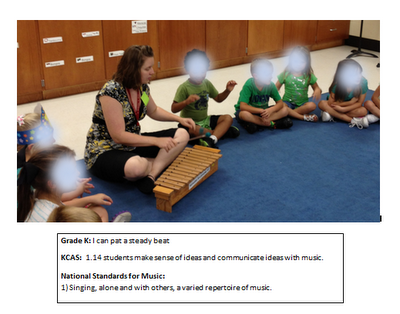 Email ThisBlogThis!Share to TwitterShare to FacebookShare to Pinterest
Labels: assessment, bulletin board 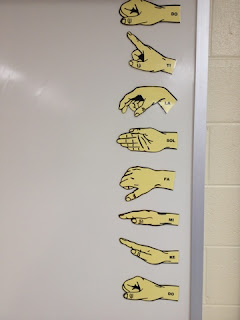 Several people have blogged about how they are using the magnetic hand signs in their classroom. I would like to share some more ideas on how to use the hand signs that I saw on Make Music Rock. I have provided 2 versions of the hand signs (one with the names and one without). Laura printed one version in blue and one in green. To help kids understand which pitches would be lines and spaces, she mixed the 2 sets alternating blue and green.

I think this is an awesome idea! I, myself, am a visual learner and this would definitely help kids with visual learning styles. Next on my to-do-list: Print hand signs in another color!

In May, I first posted about the National Coalition for Core Arts Standards. If you missed this post or are unfamiliar with the task force creating our Core Arts Standards, you may want to check out my post "Where's Our Common Core?"
The original timeline has been revised and has been posted on the NCCAS wikispace. I have copied this timeline below:

There is also a video of a live webcast from June addressing some questions from teachers. Here are a few highlights that caught my attention:

The standards will be definitely be broken down by each grade level for Pre-K through 8th grade. Currently, our national standards are grouped by K-4, 5-8, etc. For high school, they will not be assigning certain standards for each grade level because of the nature of high school electives and scheduling. More information about this can be found on the NCCAS wikispace.

Bloom's New Taxonomy is being used by the writing teams when designing the standards. If you are not familiar with the changes to Bloom's, take a look at the diagram below:
Creating now appears at the very top of the pyramid. This is great news for arts educators! This means that students participating in music and creating art should be valued more than students answering multiple choice questions about art vocabulary terms.

The video of the webcast discusses cornerstone assessments in more detail. Essentially, these assessments will be performance based and reflect processes in the arts rather than recalling information. The website will feature a database of sample assessments that teachers may search. Much of the database may be audio or visual examples One example discussed was an audio recordings of what a 4th grade singing voice should sound like. This sounds like a wonderful resource, but current timeline ends at September 2013 with no estimated deadline to finish this project. It may be awhile before we can even see the first drafts of the standards. There were a few still-shot pictures disclosed to the public of what the website database may look like. I posted these in my previous post "Where's Our Common Core?" If you missed that post, feel free to check it out.

I will continue to check the NCCAS wikispace periodically and update you all with any important updates that are released.

Posted by miredo at 6:17 PM No comments:

I just want to apologize to everyone for posting very little now that school has started. Although the pressures of the school year are in full swing, there are other reasons I have not had much time to blog. I have been a little under-the-weather lately. But, I am happy to announce that we are expecting our second child in March. The first trimester queasiness is starting to subside and I'm getting more energy back. I hope to post more regularly now. That is, until the second baby arrives :) But, I am currently experiencing some insomnia, which is why I'm blogging at 4 am.

On another note, this year I have been blessed with my very first student teacher. Although Ms. Morrison's passion is to become an orchestra director, she is slowly becoming more comfortable working at the elementary level. I am confident that if she finds herself in an elementary position, she will serve her students well. She has one more week with us before she must move on to her secondary placement. I will be sad to see her go; I have enjoyed her companionship.

Lastly, (drumroll, please . . . )
Next Thursday at our faculty meeting we will be trained on our new iPads! I am so excited! For anyone who has read my blog, you probably know how much I love new technology. We are VERY fortunate to have interactive white boards, document cameras, among many other things. We received most of this technology through our construction renovation. The special ed department received iPads last year with special ed funds. Our principal somehow found money to supply the rest of the faculty with iPads as well. I will certainly  be blogging about this technology in the near future. So, stay tuned!
Posted by miredo at 6:05 AM 1 comment:

Greetings, from Kentucky! We just finished a lesson introducing the mountain dulcimer, Jean Ritchie, and a Kentucky folk dance, "Old Betty Larkin." The dulcimer is Kentucky's state instrument, so I always make sure to expose my students to our Kentucky heritage at least a couple times throughout the school year. "Old Betty Larkin" is a game song that any age will enjoy. I teach this lesson to 2nd-5th grade every year and it is a favorite the kids remember from year to year.

The song and dance can be found in "120 Singing Games and Dance For Elementary School" by Lois Choksy and David Brummit. This is a great resource and I use it often. If you don't currently own a copy, I promise it will be worth your investment! On westmusic.com, this retails for $162.00. I know I paid more than $100 for my copy several years ago when I purchased on amazon.com.  I did a quick search and found it at walmart.com for only $68! What a deal! 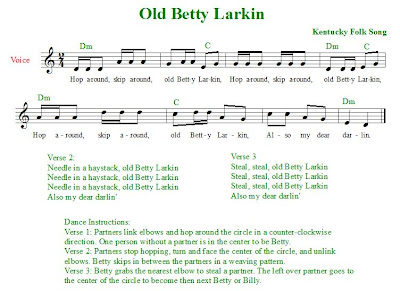 The song is in D dorian, but the kids usually pick up on the melody very quickly. (It's actually refreshing to get out of the world of C Major pentatonic!) I usually accompany the song on my dulcimer just playing a drone throughout the song without worrying about the melody string because I have zero skills or training in actually playing the dulcimer. There are chord changes you could choose to play if you were accompanying the song on piano, guitar, or even Orff instruments. (I've always wanted to make an Orff arrangement for this song but haven't gotten around to it yet!)

We repeat the song several times. Usually we try to give everyone a turn, but sometimes we just run out of time. If you have an even number of students, we have 2 people in the middle to be Betty/Billy. I just remind them to go to opposite sides of the circle to start the weaving so that they don't end up stealing 2 people from the same couple. This is a time saver to allow more kids to have a turn. The older kids could handle 3 in the middle if you are adventurous! 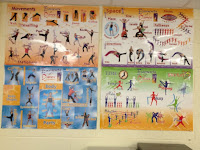 I always encourage students to use the dance posters for help answering these questions. If you missed my post talking about these fabulous dance posters, click this link.

This year, I saved the last 10 minutes of class to talk about Jean Ritchie and show a video of her playing "Old Betty Larkin" on the dulcimer. The video comes from a radio show that is televised on our local PBS station, "Woodsongs Old-Time Radio Hour." Their website woodsongs.com has video and audio archives of all their shows. The episode I use is #450. A direct link to the video can be found by clicking the picture below. The video opens in Windows Media Player. 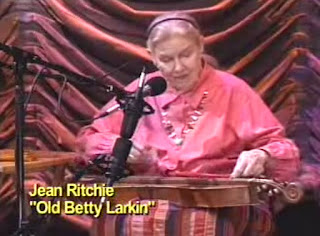 You can cue the video to 18:10 to show only the song "Old Betty Larkin" but before she plays she talks about being a young child sneaking to play her father's dulcimer when he was out working in the fields. She also talks about going to New York straight out of college. When people saw her carrying the dulcimer on the subway, they would beg her to play it because they had never seen an instrument like that before. She began playing in clubs and is credited with bringing the sound of the dulcimer to the world-wide audience. Jean also talks briefly about the tuning of the instrument. It is a wonderful interview, very insightful and informative. The interview begins at cue mark 11:40.

After the video, I usually ask the kids to compare and contrast her version of the song to our version. Jean skips the verse that says "Needle in a haystack" but also includes another verse that says "You take mine, I'll take another." Jean's version can also be found in her book "Folk Songs of the Southern Appalachians." "Old Betty Larkin" is on page 15 and can be viewed in the preview on amazon.com. The book is $15.91 on Amazon.

I'm sure your students will enjoy this game song. If you have any other activities or suggestions to accompany this lesson, please share your ideas!
Posted by miredo at 11:18 AM No comments: