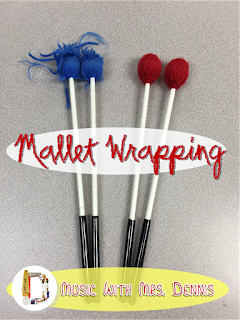 Do you have fraying mallets and a very small budget? This was my problem. But, it is not a problem anymore! I was brave and patient and learned how to rewrap my own mallets. The photo above shows blue mallets that were very frayed. The red mallets have been rewrapped by me! With a little patience and practice, you can learn how to wrap mallets too and free up some money in your classroom budget for other resources.

Before gaining the courage to make that first cut and unwrap a mallet, I watched at least 2 hours of video tutorials. There are several different techniques and videos out there in cyberspace, but I found that Episode 198 from Drummer Talk provides the most comprehensive and clear demonstration.

I suggest you watch this entire video BEFORE attempting to wrap your own mallets. These are the supplies Dave Kropf suggests before beginning your project:

As you wrap and cross the yarn over the top of the mallet, it should be placed off-center. This creates a nice crown which will be stitched to keep the yarn in place. When first attempting to wrap, I found it easiest to keep the yarn off-center on mallets that have more of a flattened core on top. If you have one, begin with this style core rather than a spherical core. 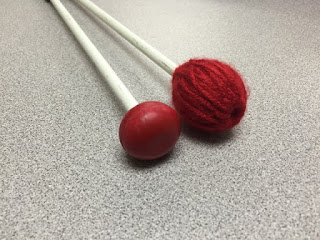 After wrapping about 4 mallets, I found a groove and my wrapping and rotating technique became more automatic. During several evenings, I would sit on the couch and wrap mallets while watching television. Below, you can see many of the mallets I have rewrapped. The mallets with the white shafts were crowned with the technique Dave uses in the video because that is how they were crowned from the factory. Most of the mallets with black shafts were crowned with a back-stitch because I tried to imitate how they came from the factory. 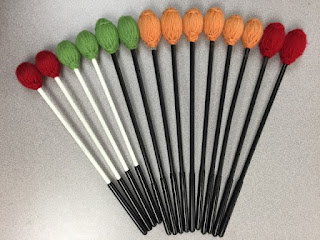 I encourage you to find some confidence and attempt to learn something new! After wrapping several pairs, I looked back at the first pair I wrapped and decided to cut them off and rewrap them again! My technique had improved so quickly, that I was not happy with my first pair anymore. I even got a little wild and crazy and made RAINBOW MALLETS!!! These are a great incentive. I reward a student who is doing a great job and allow them to play with the rainbow mallets like a ROCK STAR! 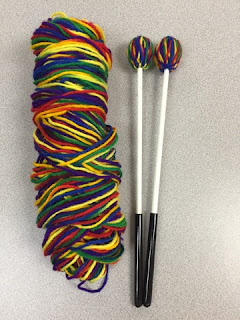 Go forth! Be brave! Happy wrapping!

Update: This post has been featured on the March 2016 Music Education Blog Carnival. Check out the rest of the carnival by clicking this link.