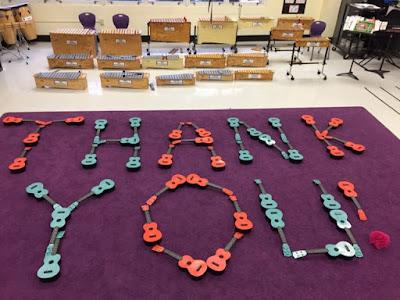 In December, we were very fortunate to be selected to receive 40 new Waterman ukuleles from Kala Music! The giveaway was announced on Kala's Facebook page. We were one of 125 schools across the country to receive this generous donation.

The shipment arrived just in time to surprise the students at our Christmas concert. I placed the ukuleles in their boxes on an old TV cart with a few unopened on the top level. I wrapped the cart with bulletin board paper to make it look like a present. 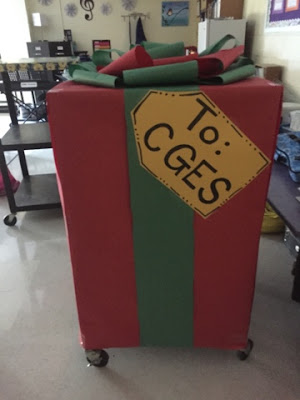 During the concert, the present was revealed and the entire school was screaming with excitement! I began learning ukulele last February after a student teacher introduced it to me. I've fallen in love with the instrument and play it often for the kids. They knew immediately what was in those boxes. On the video, you can hear one student screaming ,"Ukuleles! Ukuleles! Ukuleles!".

My first task was to find storage so I could access them quickly for distribution and tuning. Keeping them in their cardboard boxes was not going to be convenient. My librarian had an extra cabinet in her closet with a broken door. She offered it to me and, with help of the custodian, we repaired the door. 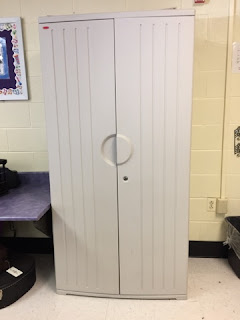 I searched Pinterest and google for ukulele storage ideas but didn't have funds to invest in wood and materials. Instead, I decided to utilize the cardboard boxes the ukuleles were shipped in. 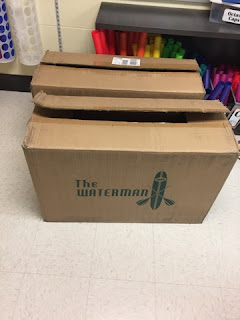 I cut each box in half and then made one side shorter (about 5" tall). 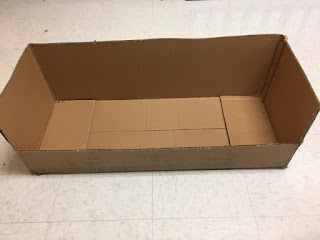 There are 4 shelves in my cabinet so I planned to have 10 ukuleles on each shelf. I measured and divided to determine the spacing needed and cut notches in the back for the neck to rest. 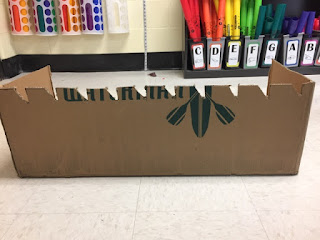 I cut some tabs in the front which fold down and keep the ukuleles from bumping into each other. 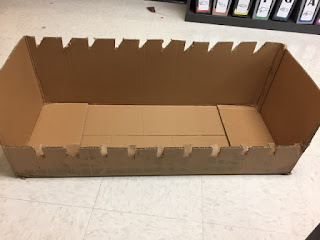 Here is a final pic with all the ukuleles nestled into their new home! 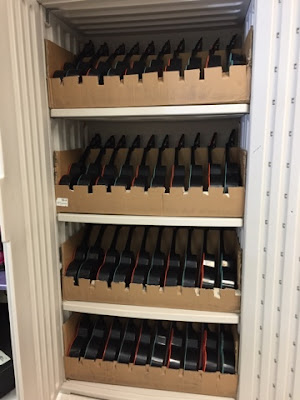 Now that I can access the ukuleles easily, I have began the long process of tuning. It is taking quite a long time to get the strings stretched to hold their pitch. The students keep begging to play them, but I told them to be patient. If they sound bad, I want it to be the students' fault and not the instruments' fault.

Since tuning is taking such a long time by myself, I have started a Donors Choose project requesting funding for some clip-on tuners. The project is titled, "Tune Our Ukuleles". Hopefully our project will get funded soon so we can begin making some beautiful music with these new instruments!

Stay tuned!
I'm sure I will post more about the ukuleles in the future!
Click here to view all my posts about ukuleles!