What do you do with the blank CDs that have errors and cannot be used to write music or data? I make mine into hall passes! 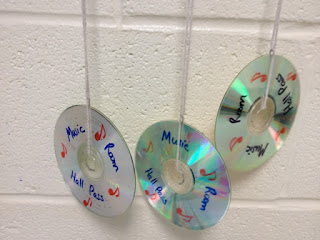 I have used CDs as hall passes for several years. This is the second set I made. For the first set, I used an entire rainbow set of Sharpies and drew bubble letters with shadowed lettering and everything. I spent a lot of time coloring on both sides of the CDs and getting a Sharpie headache. By the end of last spring, all the CDs had cracked or broken because kids had started bending them. But, the first set lasted at least 4 years. (I did change out the string just for hygienic reasons.)

This year, I decided that the time spent making an artistic masterpiece that was destined to go into public restrooms around the neck of children who may or may not wash their hands was not the best use of  my time. I just wrote the words quickly and drew some eighth notes. Do the kids care? Probably not. Did anyone even notice my detailed artistic work on the original set? Probably not. Do the kids still think they are awesome because they are shiny CDs? Absolutely.

I also found a cute treble clef coat hanger a few years ago at the Dollar Store for $5. This hangs right by my door under the light switches. 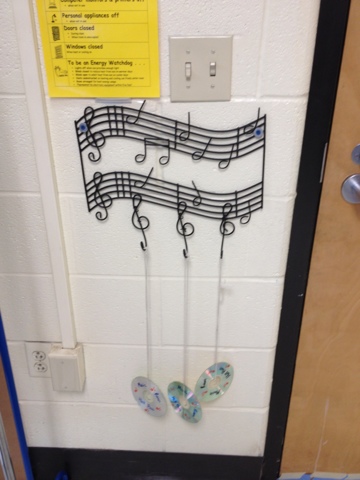 Occasionally, while standing in line waiting for their homeroom teacher to come, a kid will notice that the musical notes are not accurate and that the treble clefs only go at the beginning of the staff. I just use it as a teachable moment and have them explain what is wrong and how it should be changed in order to be accurate.