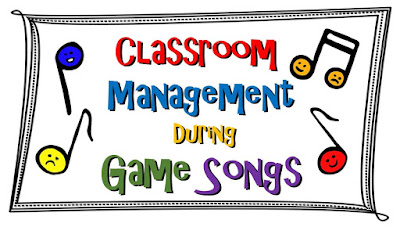 Do you ever have discipline problems with game songs? Children quickly lose patience while waiting for everyone to have a turn. It is especially difficult in elimination games when kids get eliminated early and have a longer time to wait. Over the years, I've developed some tricks to help these activities go much more smoothly.

First of all, I think it is important for your students to understand that sometimes we don't all get a turn. Class time is short and sometimes we must move on to another activity. Children need to learn how to deal with disappointment. But, most of the time, I try to allow everyone to have a turn without the activity taking up too much lesson time or encountering too many discipline problems. Here are some tips avoid chaos while still allowing everyone to have a turn.


How Will I Know When Everyone Has Had a Turn?

In most games, I rely on the students' honesty. They know they cannot have a second turn being "It". If they get tapped as "It" and have already had a turn, they just shake their head "no" so the tagger can move on to someone else. If the taggers are having a hard time remembering who has had a turn, the students who still need a turn raise their hand.

It is easier to tell who still needs a turn in an elimination game. In games like "Bounce High, Bounce Low" students do not have to leave the circle to be eliminated. Those who have had a turn simply sit in their place; those who have not had a turn remain standing. In passing games, like "Acka Backa", students must be removed from the circle as they are eliminated. This can create some discipline issues if you do not have a plan for those students. I will give you some ideas for those situations below.


How Do I Make The Game Go Faster?

Make Smaller Groups
Depending on the game and your space, it may be possible to create two small groups that play the game simultaneously. This will speed up the game and allow everyone to have a turn. For a chasing game, like "Charlie Over the Ocean" or "Cut the Cake", make sure the running paths would not collide with each other.

Make More "Its"
Sometimes it is possible to increase the number of people that are "it". I do this often in games like "Bluebird, Bluebird, Through My Window". I have up to four or five students weaving in and out at once and tapping a new friend on the shoulder to trade places. If it is a passing game, you could have more than one item passed around the circle simultaneously. Either of these modifications would make the game go much quicker.

How Do I Keep Students From Getting Bored?

With fourth or fifth grade, sometimes I allow students to move to the xylophones to accompany our game after they have had a turn. I can trust that they would be using the instruments appropriately and wouldn't need too much supervision or conducting. If it is a simple accompaniment, like a broken Bordun, the students would not need any preparation except some verbal instructions. For more complicated parts, I have the entire class learn the parts on the barred instruments before returning to the carpet to begin the game or dance.

Younger grades would need more supervision at the instruments, So, instead of using all my barred instruments, sometimes I use only one or two bass bars or just 2-4 barred instruments. I can supervise the small group much more easily. I've also had a small group reading notation on the board performing sol-mi songs on Boomwhackers. You could also have them perform a short rhythmic ostinato with unpitched percussion. This is a great opportunity for a performance assessment! After their turn playing they may return to the group but cannot be chosen as "it" anymore. If it is an elimination game, they sit to the side of the carpet and wait.

Body Percussion
During elimination games, sometimes I have students create new body percussion patterns. Second and third grade love this the most! I have one student stand in front of the eliminated group. They create a four-beat body percussion ostinato and the rest of the students copy them.

Interesting Props
A Slinky can be used to keep a steady beat.  Hold one end in each hand to make it look like rainbow. Transfer the weight back and forth to the beat. You can also open and close the Slinky with vertical, horizontal, or diagonal motions. An Original Slinky made of metal also creates a very pleasant sound!  I really want to get a class set of Slinkies, but they can be costly. Cheaper plastic springs just don't have the same weight or feel and wouldn't make as pleasant of a sound. I've even found the miniature ones by Slinky brand in the Target dollar section, but they just don't have enough weight to move to a slower tempo. Even if you only have a few Slinkies, students can take turns using them to keep a steady beat.

Beanbags can also be transferred from hand to hand to make steady beat.  My beanbags are homemade. My mother helped me make them during my first year teaching. We used plastic pellets made for adding weight to stuffed animals. The make a pleasant sound, although it is much quieter than a Slinky. (The quietness may actually be a good thing!) I asked students to hold their hands with palms up and to flatten the beanbag like a pancake. They then flip the pancake from one hand to another trying to match the steady beat.  My daughter and I are demonstrating this activity in the short video below.

Both my second graders and kindergarteners used the beanbags this week to keep a steady beat when they were eliminate from a game. They all enjoyed using these props. We practiced the pancake flipping as a class and then I collected the bean bags in the bucket before the game started. As they got eliminated, they would get a beanbag from the bucket and sit on the edge of the carpet away from the game circle. Some students wanted to throw the bean bags, but I warned them that they would lose their bean bag if they were not using it properly. If you don't have a set of beanbags, I bet your gym teacher may have some you can borrow!

In my Level III Orff course, another teacher brought in tennis balls. She had made a small slit in the balls, filled them with a small amount of BB pellets, and used hot glue to seal the hole back. We used the balls similarly to the beanbag and passed it from hand to hand, around our backs, and under our legs. We also tossed them gently in the air and would catch them to the steady beat. This would be a great activity to challenge older students. The teacher said she had a connections with a local gym and got all her tennis balls donated! You never know what you may be able to get until you ask!

Variations
Repeating anything the same way over and over would make anyone bored. So, why not change it up? Vary the tempo or change up the voice. With kindergarten, we reinforced the types of voices while practicing a steady beat. The class stood in a circle and passed a ball while saying the "Acka Backa Soda Cracker" poem. As a student got eliminated, they would go to a music stand and draw a voice card (either speaking, whisper, calling, or singing). We would use that voice to perform the poem the next round. After they drew a card, they got a beanbag to do pancake flips. This activity was very successful with minimal behavior disruptions. The students loved changing their voices, drawing a card, and mixing up the cards for the next student.  My free printable voice cards are featured in a previous blog post.

Coda
Children learn best when they're engaged in play. Game songs are a great way to get all children actively making music whether by singing or playing an instrument. I hope some of these tips help reduce your frustration and eliminate some discipline issues which may occur during games. Now that you have some tricks and strategies for these activities, what are your favorite game songs? Comment below, or add a link to share your favorite game songs with others!