My classroom door opens into the room rather than into the hallway. I would constantly get annoyed when students would line up too close to the door and then I had to make them scoot back so I could open the door.   Some people put tape spots on the floor to show where the line leader should stand, but I decided to hang something from the ceiling.

I have many music notes hanging from my ceiling to help provide a warm, welcoming atmosphere. I used to have the treble clef in the center of the room. Now, I have placed the treble clef near the door to show where the line leader should stand. Now, I have plenty of room to open the door without hitting anyone or asking them to move. 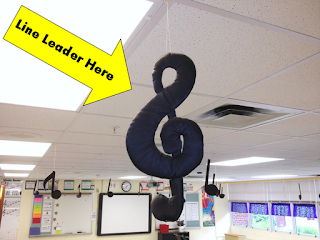 At first, this was just a simple solution to solve an annoying problem. But, later, I realized that it was helping reinforce some music vocabulary. When reading pitch notation, the students made the connection with the treble clef at the beginning of the staff and the beginning of our line. I had never even thought of that before! Now, when introducing the treble clef, I always refer back to the line leader spot.
Posted by miredo at 10:34 AM

Email ThisBlogThis!Share to TwitterShare to FacebookShare to Pinterest
Labels: organization