There are several posters on the market to show Orff bar set-ups. One popular example is sold at West Music:

For most people, these visuals may serve their purpose. However, I wanted a visual aid that I could manipulate. I wanted students to watch me demonstrate taking bars off properly. I wanted students to see what each step would look like as we take off one pitch at a time or swap naturals for accidentals. So, during the summer after my first year teaching, I created my "Fake Instrument," as the students and I have called it over the years. 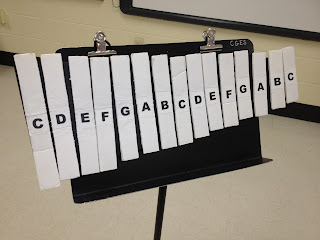 I used black and white foam core board. (I actually reused a couple boards that I had used for presentations in my public speaking course. But, you can splurge on some new boards if you don't have any you can repurpose.) I made my calculations for the white bars and used a pencil and yardstick to trace my lines. I used a box cutter to cut the foam board. I printed the letters on cardstock, cut them into squares and used a glue stick to center them on the bars. I cut the mounting board out of black foam core board (again, repurposed). It was just slightly more narrow than the white bars, just as the bars on a real xylophone extend   over the edges of the sound box. The back of the black board I placed 2 long horizontal strips for support and some black pipe cleaners as hangers.

I used velcro dots to secure the bars to the backboard; two dots per bar. (These are $3.79 online at Joann's. They can also be found at Walmart, but their online site did not list a price.) 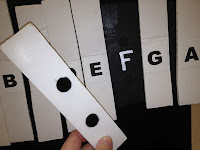 Just last year, I got tired of the students constantly asking, "what do we take off?" (even though I had probably said it 2 or 3 times already). So, the silver letters were added on the blackboard with a silver, metallic Sharpie.I already had these Sharpies; I had bought them to label my black music stands with our school name. (This 2-pack is found at Walmart for $4.13)


Of course, I needed some accidentals, they are stored in an old, metal candy tin (again, repurposed). 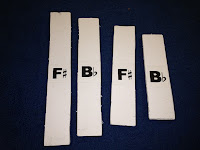 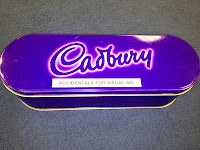 If you put a poster on the marker board you would have to turn your back to the students when demonstrating a melody. I put binder clips on the top of a music stand and hang the visual aid from the pipe cleaners. I can stand behind it and pretend play it while I sing the pitch it should make. I never have to turn my back on the students. 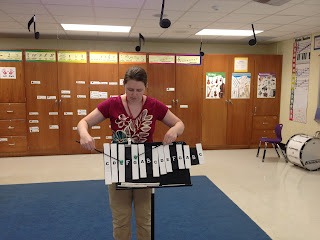 I have been using my "Fake Instrument" for 6 years now. It will eventually need to be replaced, as some of the bars have really become bent. But, I'm not ready to spend more time and money on a new one yet. It can last for a few more years at least.