On August 30, 2011, the National Coalition for Core Arts Standards had their first task force meeting. Among many things shared from this meeting is the timeline for tasks to be completed. 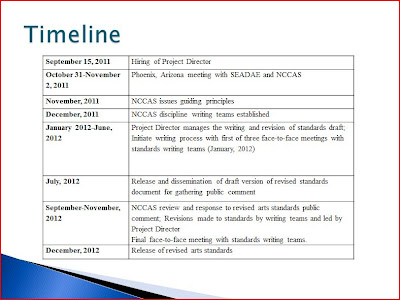 As you can see, a draft version is planned to be available in July 2012 and the revised version released in December 2012.

On November 1, 2011, the College Board presented the results of an analysis report comparing the arts standards of many countries around the world as well as several states here in the US. The powerpoint presentation is available online.

NCCAS also explored options for the website to house the standards. This seems as though it will be a very helpful tool. It appears as though it will include samples of student work to help teachers better understand and interpret the expectations of the standards. It also appears as if there will be ways to submit photos of student work. If anyone is noticing or interpreting anything different about this please share your thoughts in the comments below.

On January 24, 2012, the major pillars were announced  on a live web-broadcast. 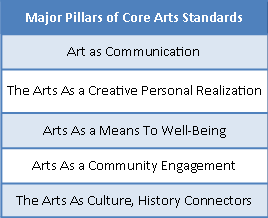 A Draft of the Overarching Framework was also released and is available as a pdf.

This is a very brief explanation of important stages that I have noticed in the development of our Core Arts Standards. The NCCAS wikispace has many more details and documents available for you to view. They explain who is on the committees and how they were selected. There is a calendar of events to keep up to date on the current stage of the process. I will be checking on the wikispace periodically and will post any important news and developments.